Or sign-in with another identity provider 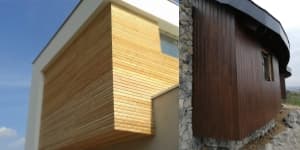 Installation of a wooden ventilated facade

A good owner, concerned not only with the economical expenditure of funds for heating, but also with the condition of the facade of his cozy home, will be very interested in the multi-layer construction of a wooden ventilated facade.

The wooden ventilated facade allows you to insulate the house, remove wall defects, make a beautiful decor, add additional strength and durability of the house frame, soundproofing the walls. And also simplifies the care of them, extends the period of the next repair and operation of the house as a whole. 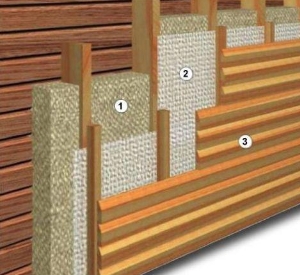 Each layer has a specific role in the ventilated facade for the home. The ventilated facade consists of a wooden wall surface, a layer of insulation, a moisture-proof membrane, a ventilation gap and a decorative facing layer. The choice of insulation is dictated by the financial capabilities and climatic conditions of the location of the house. Warming in the northern regions is given special attention.

A special wind protection film protects the structure from the damaging effects of wind gusts and moisture. The ventilation layer, which prevents the formation of condensate, is formed when installing a lattice structure (lathing). Finishing details are fixed on the crate. The ventilated facade for a wooden house allows its inhabitants not to freeze in winter, to feel the saving coolness in the summer heat.

Insulation of the ventilated facade 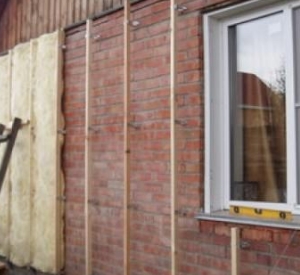 Glass wool, polystyrene, stone wool slabs are used as insulation. We clean the walls. We fill the gaps. We mount the crate on the wall.
If you do not want to insulate the facade, we attach the windproof film to a self-adhesive mounting tape (double-sided tape) directly to the walls.

We collect the crate from the beam from 3 to 5 cm. We fasten the crate beam vertically at a distance slightly less than the insulation used. So that the insulation plate completely fills the entire space between the bars of the crate.

At the corners of the facade, it is recommended to install a protective mesh to reduce wind loads. 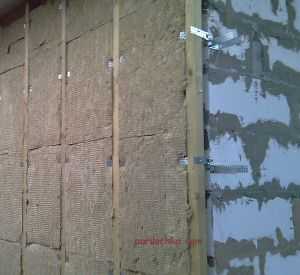 On the laid insulation horizontally, with an overlap of 10 cm, we lay strips of vapor permeable insulation. It protects the insulation from rain and wind, while allowing the walls to "breathe".

The elements of the lining in the lower part should not be lower than 30 cm from the ground. Air moving from the outside prevents the penetration of moisture through the pores of the material of the wall structure and its destruction. With the constant movement of air on cotton slabs, condensation does not settle.

Installation of a ventilated facade

If the facade boards have straight edges, they begin to overlap: the top element with its edge should slightly overlap the bottom board, thereby excluding cracks through which water can penetrate the walls. Horizontal laying is made from below. 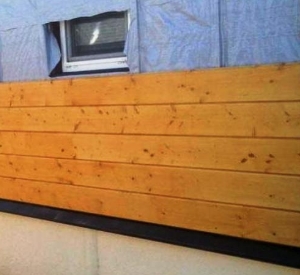 If you want to install the panels vertically, use models with a locking groove-thorn connection. Another styling option is diagonal. Here, the castle connection is oriented with the spike up and the groove down. Then moisture will not penetrate into the places of fixation of the boards, and drain on them. At the bottom of the ventilation gap is covered with a mesh that protects the facade from the penetration of insects, rodents. Provide drainage for dripping moisture. 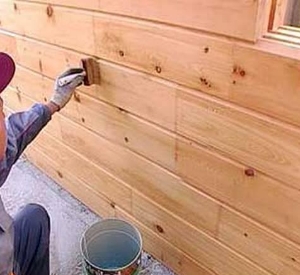 A laid facade needs additional external protection. If you want to preserve the natural look of wood - facade boards can be coated with colorless or tinted varnish. If using material stained in the massif, only those areas where the boards were cut should be varnished or painted. Wooden ventilated facades are lightweight and sparing loads on the foundation of the house.